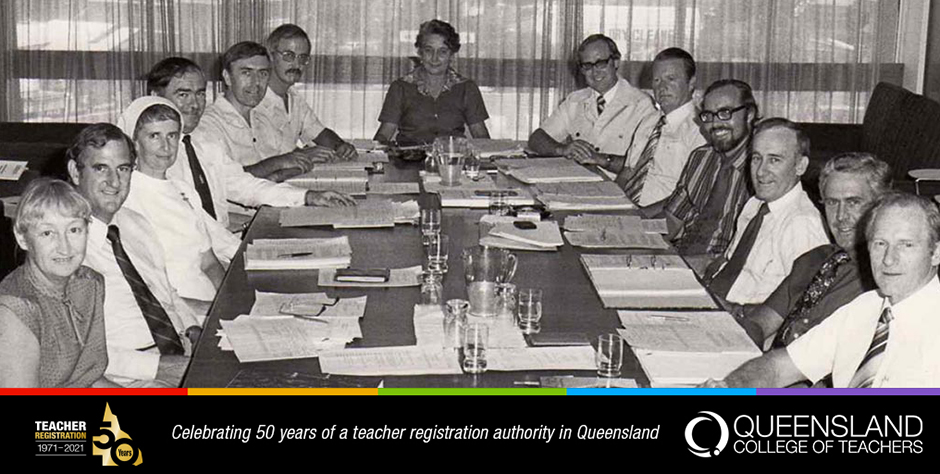 The background to teacher registration in Australia and the origins of the Queensland Board of Teacher Education can be traced to the second half of the 1960s. A report of the Committee of Tertiary Education in Australia to the Australian Universities Commission (the Martin Report, Martin et al., Volume 1, 1964) recommended the establishment of a Board of Teacher Education in each state of Australia. This report affirmed that the principal functions of these Boards should be to (i) approve the content of courses and standards in professional teacher education programs, and (ii) assume the authority to grant the teacher’s certificate for that State. In addition, the BTE was to be the authority to grant autonomy to teachers’ colleges - “The committee sees the raising of the minimum standard of entry, the development of autonomous colleges and the establishment of Boards of Teacher Education, independent of employers but with authority in the field of teacher preparation, as necessary steps toward the development of the professional body of teachers” (p. 124). Volume 3 of the Martin Report (1965) examined the roles of teachers’ colleges and universities in teacher education, including the development of Bachelor of Education degrees in some universities. It also emphasised the importance of in-service education, and postgraduate training in educational administration for aspiring principals.

Tronc (1978) named the Martin Report as the primary influence on the establishment of the Board of Teacher Education and “a turning point in the process of professionalising teachers” (p. 38). The Martin Report noted:

There can be few professional fields in Australia about which there has been so much debate during recent years as that of teaching. Evidence submitted to the Committee testifies to this fact, but it also reflects a measure of confusion in that some of the supplementary problems tend to overshadow some of the more fundamental. In the Committee’s view, there are two main problems. There is the obvious need to produce in the near future, a greater number of teachers, and there is the more significant need to improve the quality and preparation of all aspirants to the profession. It is a juxtaposition of these two problems which constitutes the greatest difficulty confronting educational authorities responsible for the training of teachers. Improvement in quality without regard for an adequate supply of teachers, or an increase in the supply, without regard for quality, would fail to meet the situation (p. 114).

In addition, Tronc (1978) highlighted other complementary and parallel influences which led to the establishment of the BTE. These included:

The Queensland Teachers Union developed a firm stance on teacher registration from around 1967; in particular in a position against the move by the Queensland Government to introduce short courses for secondary teaching in response to teacher shortages and high student-teacher ratios.

A motion was passed at the Annual Conference of the QTU in 1968 and forwarded on to the Australian Teachers Federation Conference in 1969. It read:

“That a Committee be set up to formulate and present to the Australian Teachers’ Federation Conference in 1970, a log of conditions of employment, and to make recommendations as to the feasibility, advantages and disadvantages, and stages necessary for the fulfilment that:

a) All teachers in Australia be registered by a Federal Board analogous in constitution and powers with those which register and de-register other professional practitioners;

b) All teacher employees in Australia be gathered into a single industrial union;

The Murphy Report was the product of a committee established in 1967 to “investigate teacher education in Queensland and to make recommendations for its possible reorganization and future development” which was chaired by the then Director General Education G. K. Murphy. It presented its report (known as the Murphy Report) in 1971; described by Tronc as “a highly significant blueprint which was to shape the development and organization of teacher in Queensland for the next decade.” (p. 52). Despite some initial changes to what was outlined in the Martin Report (i.e., that a Teacher Education Council be a subsidiary of the Board of Advanced Education), the Murphy Report’s recommendation that a Board of Teacher Education be constituted in Queensland was ultimately supported. The Murphy Report recommended as follows:

R. 38. The provision within the Education Act 1964-1970 relating to the setting up of a Board of Advanced Education, a Board of Teacher Education and councils for teachers’ colleges, should be implemented as soon as possible, with full financial management responsibilities passing from the Department as from the 1971/72 financial year.

R. 39. The provisions within the Education Act relating to the registration of teachers should be implemented as soon as possible after the setting up of the Board of Teacher Education (p. xii).

The establishment of the inaugural Board of Teacher Education in Queensland

The 14 members of the Board of Teacher Education were appointed on 3 June 1971 and the Board, chaired by A. E. (Arch) Guymer, first met on 16 June 1971. The Founding Executive Officer, E. F. (Ned) Shogren, formerly Assistant Director of Teacher Education, was in attendance. The Board met on 6 occasions during 1971, with a focus on appointment of staff to fulfil functions of the Board, developing by-laws for teacher registration (approved on 4 November 1971) and examining review processes for teacher preparation courses, setting up a Course Assessment Committee in December 1971.

The work of the Board during its first 2 terms was summarised in the 1979 Annual Report (BTE, 1979b) as the introduction of the system of registration and the establishment of the register, and the review of all pre-service teacher education courses to assess their suitability for registration purposes and to advise the Board of Advanced Education on their accreditation for advanced education awards. The 1979 Annual Report confirmed that over 36,000 teachers were on the register, and during 1979, 19 courses in 8 institutions were reviewed (through the Board’s Course Assessment Committee) and recommended for accreditation or reaccreditation. This report also emphasised other areas of work of the BTE, including the preparation of teachers for the teaching of reading and associated language skills, induction of beginning teachers, and the training of Torres Strait Island teachers.

Changes to the Board

1979 heralded a number of personnel changes to the Board. The Board was reconstituted with three new members. In addition, the Founding Executive Officer E. F. (Ned) Shogren had retired in October 1978 and the Founding Chair A. E. (Arch) Guymer retired in June 1979.

Ned Shogren was recognised for his establishment of the office of the Board and the establishment of its administrative and operational functions; in addition to his leadership in supporting the key functions and achievements of the Board during its initial stage of development. “He was also active in promoting research into teacher education and laid the foundation for much of the Board’s substantial research output in the 1970s and 1980s” (Hall, 2004).

Mr Neville Fry was appointed as the new Executive Officer. Mr Fry had prior experience as a teacher and educational administrator in Victoria, Queensland and Papua New Guinea. Immediately prior to his Board appointment, he was Principal Administrative Officer at the University of Queensland.

Arch Guymer was roundly applauded for his leadership of the Board during its foundation years. As Chair he led the establishment of key initiatives toward successful outcomes and brought together a disparate team of Board members to work together to promote the teaching profession in Queensland.

Professor Betty H. Watts, Professor of Special Education and director of the Schonell Educational Research Centre at the University of Queensland was appointed Chair. Professor Watts had been a Board member since its inception in June 1971, became its Deputy Chair in 1977, and chaired the Course Assessment Committee since November 1975. Professor Watts represented Queensland on the committee which undertook the Commonwealth inquiry into teacher education and produced the Report of the National Inquiry into Teacher Education in August 1980 (Auchmuty et al., 1980).

The latter part of the 1970s saw a number of reviews which would impact teacher education. May 1977 saw the beginning of a review of teacher education in Queensland with a committee appointed by both the Boards of Teacher Education and Advanced Education. This Review (known as the Bassett Review, 1978) presented its report in October 1978. This report made 40 recommendations around course design and content, methods of teaching and evaluation in teacher education courses, teacher education learning environments, the role of tertiary institutions, training educational administrators, curriculum development, and guidelines for the selection and recruitment of student teachers. The Board of Teacher Education released the report straight away and devoted much of 1979 to seeking stakeholder comments and proposed to develop policy responses in 1980.

The reports derived from the above 5 reviews provided the background to much of the work of the Board into the 1980s. This period of the history of the Board will be presented in the next E-news.

Tronc, K. (1978). The establishment and development of the Queensland Board of Teacher Education. A dissertation presented in partial fulfilment for the degree of Master of Public Administration, University of Queensland.

Williams, B. R. et al. (1979). Report of the Committee of Inquiry into Education and Training. Canberra: Government Printer.